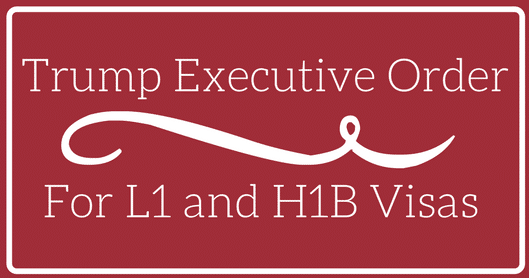 President Trump’s first 100 days in the oval office have been anything but quiet, especially for immigration news. The headlines these days are enough to put any foreign-born worker on full alert for any changes that might affect their status. When the White House released a draft of Trump’s executive order for work visas such as the L1 and H-1B, we here at SGM Law Group wanted to make sure that our readers and clients were well informed.

What is the Purpose of the Work Visa Executive Order?

An executive order is a mandate issued by the President that has the power to enact immediate change throughout agencies and departments of the U.S. Federal Government. These orders are not permanent and are still subject to being revised or overturned by either the Supreme Court or Congress.

Recently, the unsigned draft of one such order was released to the public called The Executive Order on Protecting American Jobs and Workers by Strengthening the Integrity of Foreign Worker Visa Programs. You can read the complete text here.

The purpose behind this order is to ensure that the employment of foreign laborers and professionals in the U.S. is not detrimental to the U.S. job market or the American workers that benefit from it. President Trump’s overall plan is to create programs that limit the number of foreign nationals who receive work visas such as the H-1B or L-1 to only the best and brightest applicants.

IMPORTANT: As of this post’s published date, this order has neither been implemented nor signed. The purpose of this post is only to keep readers informed of what changes may come in the near future.

In the world of immigration law, parole is a method that allows people to enter the U.S. without a visa under extenuating circumstances. The executive order will address the use and abuse of parole as a means to enter the U.S. and work through fraudulent means.

It will do this by instructing the Secretary of Homeland Security to “immediately terminate all existing parole policies, guidance, and programs that do not comport with the INA (Immigration and Nationality Act).

This aspect aims to make it so that “parole may never be used to circumvent statutory immigration policy” by limiting the power of parole wielded by the Secretary of Homeland Security.

Further on in the work visa executive order draft, we read that the President is calling for a program that involves “performing site visits at places of employment of L-1 nonimmigrant workers”. This will be to ensure that multinational employers are not systematically replacing their U.S. workers with workers from the foreign branch or affiliate.

The order also states that a two-year window is given to the Secretary to expand the site visit program to include every work visa status. This would mean regular site visits to all employers who employ foreign nationals under work visas.

The President may also use this executive order to create a commission or committee to regularly review and analyze the current immigration law. This will allow the Secretary of Homeland Security to make the necessary changes “to move toward a merit-based system”.

This merit-based system has several connotations and may involve awarding visas to highly-paid employees or employees with the highest qualifications. However, it is impossible to know for sure what the details or outcome of this system will be.

E-Verify is a program that allows employers to demonstrate to the U.S. government that the foreign visa applicant is legally allowed to work in the United States. While it is not required, it is highly recommended by the USCIS.

This new executive order will work to promote E-Verify as an advantageous option for employers to register their foreign workforce. It may even bestow “immigration-related benefits on participation in E-Verify”.

Ultimately, this revised immigration program has the goal of decreasing illegal immigration and protecting the jobs of current U.S. workers. To facilitate the first part, President Trump is proposing that the process of obtaining lawful permanent residency (green card) should be streamlined “in order to reduce inefficiencies in the way immigrant visas are allocated”.

Because this executive order only calls for a plan to be developed, we still have yet to see how the President hopes to streamline the green card process.

President Trump also calls for the Secretary of State, Secretary of Homeland Security, and Attorney General to perform an investigation into the “extent of any injury to U.S. workers caused by the employment in the United States of foreign workers admitted under nonimmigrant visa programs”.

This means that, under the work visa executive order, U.S. workers who have been displaced by “nonimmigrant workers in the H-1B, L-1, and B-1 visa categories” will be heard by this investigative entity. The goal of this process is to identify situations in which immigration policy is being abused and has become a detriment to American workers.

Near the end of the executive order draft, it addresses the issue of transparency with the American people. In an effort to inform the populace about the current immigration environment, President Trump is calling for the Secretary of Homeland Security to create reports that give details about work visas such as the H-1B and L-1.