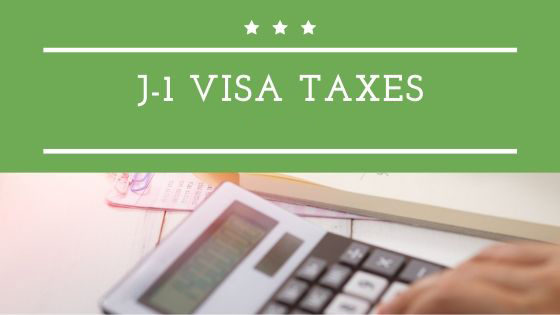 The United States tax system is a broad, murky, and deep topic. The most important thing is for every eligible taxpayer to have a basic knowledge of what is expected of them based on the category they belong to. As a J-1 visa holder, if you earn wages in the United States, it is expected of you by law that you contribute a certain percentage of your earnings to the Social Security and Medicare programs. However, your tax payment arrangement will be dependent on whether you are a “resident” or “non-resident” alien.

The J-1 visa is for foreign nationals who wish to participate in an approved exchange visitor program in the United States. Successful J-1 applicants engage in various activities through designated exchange visitor sponsoring organizations for a specified period of time.

There are various categories of programs covering a wide range of fields, which include lecturing, studying, instructing, teaching, demonstrating special skills, observing, as well as medical training or education. As a J-1 visa holder, you may work in the United States during your program.

How Do J-1 Visa Taxes Work?

A resident alien, as defined by the Internal Revenue Service (IRS), is a non-citizen who is a green card holder or someone who meets the substantial presence test. In some cases, an alien may be considered a resident alien if he or she makes the first year election, which can be based on being a non-resident spouse treated as a resident, having a closer connection to a foreign country, or being classified under the tax treaties policy.

Can a J-1 Holder Be a Resident Alien for Tax Purposes?

As a J-1 visa holder, you are not likely to qualify through having a green card. However, you can still meet any of the other two requirements to be classified as a resident alien for tax purposes, especially the substantial presence test.

If you meet the resident alien requirement, you will be taxed under the same regulations that apply to a U.S. citizen. Resident taxpayers are to report their worldwide income on their U.S. tax return. They are also, in some cases, required to report their foreign investment and bank reports.

How to Calculate Substantial Presence Test

The substantial presence test is calculated using the number of days you stay in the United States in a particular period. To meet the test, you are required to be physically present in the U.S. for at least:

A non-resident is someone who is a non-citizen and does not meet either the green card or the substantial presence test. This is the category where most J-1 visa holders belong. If you are a new arrival on a J-1 visa, you are automatically a non-resident alien.

So, with this in mind, passing the substantial test within the short period that their programs allow is usually out of the reach of many J-1 holders. This explains why most fall into the category of a non-resident alien.

While resident aliens are to report their worldwide income, non-resident aliens, on the other hand, are only required to report income received from sources within the U.S. This income can be reported as either of the two following options:

Effectively connected income includes personal service income and business income. These are the wages earned while working in the United States, which are taxed under the graduated rate structure just as it applies to resident aliens.

Non-effectively connected are incomes from investments, which include interest, capital gains, and dividends. However, capital gains outside the sale of real property are exempt for non-resident aliens with less than 183 days in the United States.

Depending on your category and the income that is being filed, the required U.S. tax documents include the following:

Are There Special Tax Exemptions for J-1 Visa Holders?

If you are already in the U.S. on a J-1 visa, you might be able to avoid certain tax payments if you fall in any of the exemption categories below:

Social Security and Medicare are generally mandatory for anyone who works and earns an income in the U.S. The total taxable amount is 15.3% of the employee’s gross pay. The employee pays half of the amount (7.65%) while the employer pays the remaining half. 6.2% of it goes toward Social Security and 1.45% for Medicare. The Social Security Tax is for retirement benefits required of almost all workers even from those who might not be able to spend enough time in the United States to enjoy the benefits.

The good news is that many non-resident J-1 visa holders are exempt from paying Social Security Tax as long as the services performed are allowed by the USCIS according to their visa and exchange visitor program. J-1 researchers, trainees, teachers, au pairs, physicians, scholars, and summer camp workers who perform services to carry out the specific purposes for which their visas were issued are all exempt from the tax payment. Such services include:

Many exchange visitors and employers are unaware of this exemption. So, if you fall into this category and your employer is not aware, you can inform them that you are not liable for these J-1 visa taxes.

This is another category of tax exemption for non-resident J-1 visa holders. If you are working in the United States for a foreign employer under the terms of a Totalization Agreement, you will be exempted from paying Social Security and Medicare taxes. Keep in mind, however, that once you become a resident alien, this advantage will no longer be available.

If you are from any of the foreign countries that have tax treaties with the United States, you may benefit from a tax exemption. You don’t have to be a citizen of the country—you are qualified as long as it is your immediate place of residence before coming to the United States.

A treaty exemption means you will be taxed at a reduced rate or completely exempt from paying certain taxes. The rate and/or exemptions vary depending on your country and the type of income received. Most of these exemptions are only available to non-resident aliens, and some can also be claimed even after becoming a resident alien.

It can sometimes be difficult knowing whether or not you qualify for one. Therefore, it is highly recommended that you consult an immigration lawyer or a tax professional. There are over 65 countries under this treaty arrangement. You can check this IRS webpage to be sure if you qualify.

Common Mistakes You Should Avoid With J-1 Visa Taxes

In the United States, every working individual with a certain income level is required to know the basic regulations guiding tax filing requirements in their category. The following are common tax errors, which you must guard against:

From the above explanation of two categories of aliens under the U.S. tax system, you can see that resident aliens and non-resident aliens have a different set of rules. If you file under an incorrect category, it will affect your tax record. If you notice such mistakes in your past filings, you need to reach out to the IRS or a tax professional for help.

The tax system in the United States is pay-as-you-go, which implies that J-1 visa taxes are withheld from your paycheck by your employer, who will then remit it to the IRS. It is your responsibility to ensure that your taxes are duly reported by your employer. According to the IRS, if you are concerned that your employer is improperly withholding or failing to withhold your income taxes, you should report it by contacting the IRS at 1-800-829-1040.

Filing on a Wrong Form

Each income, asset, or employment tax has its own dedicated form. Be very sure to know what is applicable for your case and complete the form correctly.

This is peculiar to resident aliens subject to worldwide income. Failing to disclose your international bank accounts will attract a heavy fine if you are caught.

Penalties for Tax Offense In the U.S.

Deliberate noncompliance with the tax law is a serious offense in the United States just as it is in every other nation, incurring a heavy punishment. As a foreign national, it will affect you in many different ways. Tax offenses could range from tax evasion or tax fraud.

Tax Evasion: You will be considered to have committed evasion when you deliberately avoid paying a true tax liability. This could mean nonpayment or underpayment of J-1 visa taxes.

Tax Fraud: Tax fraud is when you willfully and intentionally lie on a tax return for the purpose of reducing the amount of tax liability you should pay. This may include giving false information on deductions, not reporting income, using a false Social Security number, or claiming personal expenses as business expenses.

A tax offense is categorized as a crime of moral turpitude, and when a tax offense causes a revenue loss of above $10,000 to the U.S. government, it is considered to be an aggravated felony. Being caught may:

There are many immediate and future implications for violating the J-1 visa taxation requirements, which is why you shouldn’t be ignorant of the law or try to cut corners with the system. VisaNation Law Group has a team of highly knowledgeable immigration attorneys specialized in providing high-quality legal representation. They will help you avoid possible pitfalls that could affect your application process or stay during your J-1 program in the United States.