People around the world eagerly await the monthly visa bulletin to see if their priority date is any closer to being current. Here at SGM Law Group, we make sure to take a moment and help our readers digest the numbers and facts from the bulletin so you can have a better idea of where your green card stands. For an easy-to-access analysis of the June 2017 visa bulletin, you’ve come to the right place.

Overall, the June 2017 visa bulletin shows an average amount of movement in most areas compared to previous months. However, there are some sections that have seen no movement whatsoever. But what is truly alarming is this: for the first time in many months, the EB-1 category has retrogressed several years. Learn which countries are affected below.

As a reminder, the date that the USCIS receives your green card petition is your priority date. You will need to keep up-to-date with the final action dates given in each month’s visa bulletin.

There are four preference levels and five chargeability groups in the family-based green card category. The chargeability groups are China, India, Mexico, the Philippines, and all other countries (called the general category). Let’s take a look at how the dates have moved in the visa bulletin for June 2017.

The F1 green card is the first preference and is designed for the children of U.S. citizens to immigrate to the country.

F2A: this is for the spouses and dependents of lawful permanent residents (green card holders).

F2B: for the unmarried children of green card holders that are 21 years old or older.

The last family-based preference level is the F4. F4 applicants are the siblings (brothers and sisters) of U.S. citizens. As in previous months, this category has seen the least amount of movement. The June 2017 visa bulletin breaks the employment-based categories down into five preference levels as well as six chargeability areas. Those areas are the general category, China, India, Mexico, the Philippines, and Central America (or Guatemala, El Salvador, and Honduras). For the purposes of this visa bulletin analysis, we will only focus on the first three preference levels.

The EB-1, a very prestigious green card, has not seen retrogression in many months. It is designed for people with extraordinary ability, outstanding researchers and professors, and multinational managers and executives. This month, however, we see that two areas are affected by the retrogression.

The EB-2 green card is for foreign nationals who possess either an advanced degree or exceptional ability in their field.

The third employment-based preference level is the EB-3 green card for professionals (bachelor’s degree holders), experienced workers, and unskilled or “other” workers. This last category has slightly different dates than the other two, which can be noted on the chart below. 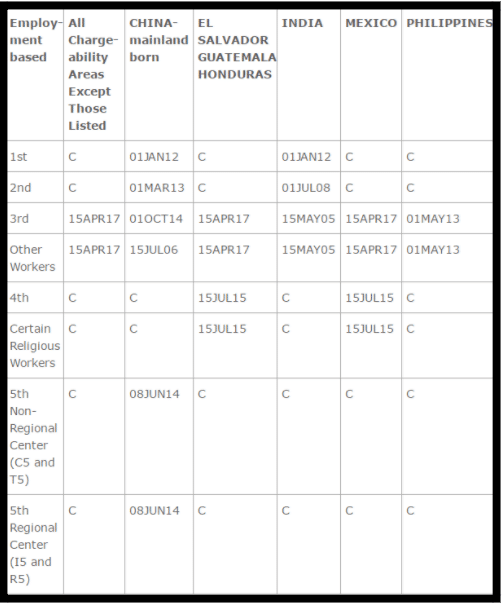 The visa bulletin for June 2017 has definitely made some changes from the previous months. With no movement in several areas and even a retrogression in the EB-1 category, this tells us that more people are petitioning for green cards as the months go on. If this continues, we may see more retrogression in the future.

In addition to this, there are policies in the making (such as the newest Executive Order on Protecting American Jobs) that call for a reevaluation of the green card issue to streamline the process. How this will be done remains to be seen, but we may begin seeing improvement closer to the beginning of the 2018 fiscal year (October 1, 2017).

How You Can Stay In The Know

Don’t miss a single visa bulletin update by subscribing to the Department of State’s monthly newsletter. Have the news like the June 2017 visa bulletin sent to your email address by sending a message to [email protected] with a message body that contains the words “Subscribe Visa Bulletin”.

With more and more people filing for green cards every day, the backlog is growing and the wait times are getting longer. Don’t let the June 2017 visa bulletin worry you. If you have already filed your petition or are planning on filing one in the future, it’s always best to have a qualified attorney at your side.

Here at SGM Law Group, our dedicated immigration lawyers are on hand to make sure that you have the best chances for approval, that your wait time is as short as possible, and that any unexpected issues are handled with expert care.

To get in touch with one of our attorneys for your green card process, feel free to fill out this contact form and schedule your consultation today.