How to Get a Green Card in USA Without Marriage 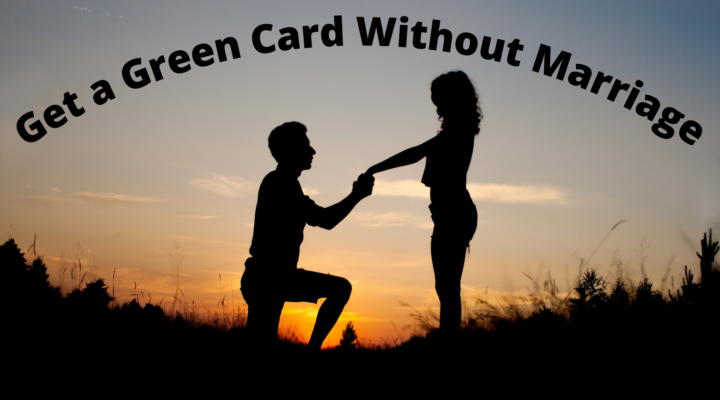 As a foreign national, there are several ways through which you can become a U.S. green card holder and lawfully live and work permanently. On this page, though, we will show you how to get a green card in the USA without marriage.

Broadly speaking, green card eligibility can be categorized into three different groups. The first one is family-based green cards for spouses, parents, siblings, and dependent children of U.S. citizens and permanent residents. The second category is employment-based green cards. The third category is known as a special immigrant green card.

How to Get Green Card in the USA Without Marriage?

The marriage-based green card is one of the most popular routes to becoming a U.S. permanent resident. But since not all immigrant visa applicants have marriage ties to U.S. citizens or permanent residents, foreign nationals with the right skill sets, competence, special abilities, and outstanding academic qualifications are given a chance to live and work permanently in the U.S. using several different methods, starting with employment-based immigrant visas.

Both foreign nationals who are already in the U.S. or are outside the U.S. may file for an employment-based visa if they are already working for an employer or they have received a job offer from a prospective employer. The employer will be the one to file the petition on behalf of the employee.

Employment-based visas are subdivided into four different preferences popularly known as EB-1 (first preference), EB-2 (second preference), EB-3 (third preference), and EB-4 (fourth preference). Each of these subcategories has different requirements. Some require that you possess extraordinary skills or advanced degrees while others are meant for skilled and unskilled workers.

The U.S. immigration system allows for foreign employees to transfer to their company’s U.S. office and live in the country. So, for example, if you are employed by a multinational corporation in Vietnam and you are offered a job in Los Angeles at the same company, you may be eligible to work and live in the U.S.

To do so, you must be eligible for the L-1 Intra Company Transfer visa. You must hold a position as a:

Once you have your L-1 visa and have worked for your company in the U.S. for at least 1 year, you can apply for a green card, which would give you permanent residency. You could apply for EB-2, EB-2 (NIW), or EB-3 green card. In some cases, you would have to ask your employer to sponsor your green card.

The EB-5 Investor green card is another immigrant option for foreign nationals. This green card is for foreign entrepreneurs who are willing to invest at least $1 million or $500,000 in a U.S. enterprise. If you have the required minimum investment amount, this might be your best bet because you wouldn’t need to wait for a job offer in the U.S. However, it is important to note that the money must be invested in an approved EB-5 business. It must also provide or preserve at least 10 U.S. jobs.

If you don’t meet the eligibility requirements for a marriage-based or employment-based green card, you may be qualified to apply as a special immigrant. This is another route to getting a green card in the USA without marriage. To qualify for this category, you must be one of the following:

It is also possible to obtain a green card by being a student in the U.S. For this, you must have finished a bachelor’s or master’s degree in the U.S. If you have done so, you will become eligible for Optional Practical training, which is essentially a 1-year work permit for post-graduates.

At that point, you should secure a job, preferably in your field, and work for that company for 1 year on your work permit. After that 1 year, you can ask your employer to sponsor your H-1B visa. The process would involve your employer obtaining labor certification along with submitting numerous forms and providing the necessary evidence. In the end, if you are granted an H-1B visa you will be able to stay in the U.S. on a permanent basis.

This process is definitely complicated and has many variables in it. It also largely depends on your personal situation, education, job market, and finances. However, for many international students getting their post-graduate degree in the U.S., this could be the only option for securing a green card.

As you can see, getting a green card in USA without marriage is a very viable option for many family members!

The diversity program has up to 55,000 immigrant visas available annually for foreign nationals whose countries have low rates of permanent residency applications to the United States.

This lottery, as its name implies, mostly depends on luck, which may limit your chances of being chosen. And if you are lucky enough to win, you will need to undergo a series of processes which may take years before you can eventually become a permanent resident. It also requires that you have the education and job qualifications for the program.

Regardless of the rigor, however, it remains a good option, especially if you do not qualify for the other visa categories. Every year, many foreign nationals who are already living in the U.S. leverage this option to adjust from a nonimmigrant status to permanent resident, and many who apply from outside the U.S. can also take advantage of the diversity lottery.

Green Card Without Marriage: What to Consider

If the marriage-based immigrant visa is not an option, this means you are left with either employment-based, investment, or special immigrant categories. Before you apply for any of these categories, you will need to consider your area of interest through the lens of the USCIS requirements.

For employment-based visas, your skill set, academic qualifications, unique abilities, job experience, and other things that demonstrate your competence will determine whether you will qualify. Additionally, if you are applying for the special immigrant category, you will need to ensure you meet the conditions stated above.

Application Process: How to Get a Green Card in USA Without Marriage

The requirements for filing a green card application vary widely depending on the category. However, the following are some of the common forms and documents required for the process:

I-140, Immigrant Petition for Alien Worker

If you are applying for an employment-based green card, this will be filed by your employer on your behalf (unless you are applying for an EB-1A or EB-2 with a National Interest Waiver). As stated above, most employment-based visas are sponsored by U.S. employers. If your visa type requires a PERM labor certification, your employer will need to begin the green card process by obtaining one.

I-360, Petition for Special Immigrants, Americans, Widows or Widowers

If you are applying for a green card as a special immigrant or as a foreign employee under the EB-4 green card category, you will need to complete and submit an I-360 as part of your application process.

I-130, Petition for Alien Relative

This form is used for those who are applying on behalf of immigrant family members for a family-based green card.

I-526, Immigrant Petition By Alien Entrepreneur

This form is used to petition for an EB-5 investor green card.

Each green card category requires several documents to be submitted as supporting evidence alongside the forms. Some of the must-have items include your academic qualification, biographic information, valid passport, and recent photographs. As an employee applicant, you will need to make all documentation available in order to prove your eligibility for the position you are filing for.

Most USCIS and DOS forms come at a cost, your green card category, your age, and location (whether in or outside the U.S.) will determine the fees you are going to pay. For some forms, however, there is a fee waiver option for applicants who don’t have the financial ability to pay the filing fees.

I-485, Petition to Register Permanent Residence or Adjust Status

You will need to file this after your I-140 or I-360 has been approved and your priority date is current. You may also be allowed to submit it concurrently depending on the category you are filing for. The I-485 is used to petition the USCIS of your eligibility to become a lawful U.S. permanent resident, but only if you are already in the United States under a nonimmigrant visa. Be sure that you file the most current edition of the form.

If you are presently outside the U.S., you will need to use consular processing for your green card application. This will be done at your nearest U.S. embassy or consulate office in that country. You will be required to file a DS-260 immigrant visa application as part of your consular processing.

As part of your green card application process, you must also prove to the immigration officers that you are not inadmissible based on health grounds or past criminal records.

The medical examination is done to show that you don’t have any health condition that may endanger other people’s health in the U.S. The examination must be done by a USCIS-designated surgeon.

Additionally, if you have been involved in any criminal activity, jailed, or detained for any major crime in the past, either in the U.S. or somewhere else, you will be asked to disclose that in your application and during your visa interview. Failure to state that or giving a misleading account of it might lead to inadmissibility based on fraud, falsehood, or misrepresentation.

As an employment-based or special immigrant green card applicant, you are going to appear physically at a USCIS office or U.S. embassy for your interview. Be sure that you answer the questions truthfully, as dishonesty could lead to being barred from re-entry into the U.S.

Within 30 days of your interview, you will get a notification of approval or denial from the USCIS. If you receive approval notice, you should expect to get your green card delivery some months after that.

For a denial notice, however, the notification will state the reason for the denial. You may have the option of appealing the decision if you think you stand a good chance of having the decision overturned. Before taking any step in that direction, it is important that you consult an immigration attorney for guidance.

Below you will find some very valuable links that could help you in your research on how to get a green card in the USA without marriage:

How We Can Help You

Getting a green card without marriage can sometimes be complicated for foreign national applicants. Employment-based and other immigrant visa categories are usually subject to higher scrutiny by immigration officers. VisaNation Law Group has a team of immigration lawyers that have helped many applicants file and acquire their U.S. green card without marriage. If you are applying for an employment-based or special immigrant green card and would like to get the best legal service, you can book an appointment with one of their immigration attorneys.