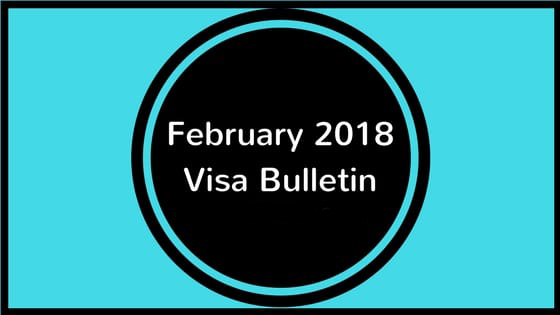 Before we get into the report for February’s 2018 visa bulletin, let’s start off by defining some of the terms we’ll be using.

On the other hand, final action dates are the dates given by the Department of State in their bulletin that usually change each month. When your priority date matches or passes the given final action date, your priority date will be considered “current”, which means that a visa number has become available and you can either adjust your status or make a consular appointment to get your green card.

This group of green cards is based on your familial relationship with your sponsor. It is broken up into four preference levels and five chargeability areas (countries or country groups that were created based on average petition volume). These areas are: China, India, Mexico, the Philippines, and all unlisted countries ( a group we’ll call the “general category”).

Here are the family-based final action dates taken from the February 2018 visa bulletin:

This first group, the F1, is meant for the children and dependents of U.S. citizens.

The F2 is even further broken down into two subcategories:

F2A: for the unmarried children under 21 and spouses of green card holders (lawful permanent residents).

F2B: for the married children over the age of 21 of green card holders.

On the third level, we have the F3, which is for the married children of U.S. citizens.

Lastly, there is the F4, meant for the brothers and sisters of immigrants.

Take a look at the chart for family-based green cards taken from the February 2018 visa bulletin. Similar to the family-based green cards, the employment-based categories are divided into preference levels and chargeability areas. There are five preference levels for these visas, though we will only be focusing on the first three due to their popularity and relevance. The six chargeability areas are: China, India, Mexico, the Philippines, Central America (or El Salvador, Honduras, and Guatemala), and the general category.

The EB-1 is the most prestigious employment-based green card and is for immigrants who can be categorized into one three subcategories:

EB-1A – for those with extraordinary ability

EB-1B – for outstanding researchers and professors

EB-1C – for the managers and executives for multinational companies

Those that qualify for the EB-2 either possess an advanced degree, exceptional ability in their field, or are eligible for a National Interest Waiver.

Keep in mind that the date for China is slightly different in the “other workers” category, as noted below.

For visual learners, here is the chart for employment-based green cards pulled from the February 2018 visa bulletin. Here is what the next few months will likely look like according to the bulletin:

How You Can Stay Up-to-Date

The best way to avoid being out of the loop when it comes to your green card is to stay updated on the latest immigration news. To get the February 2018 visa bulletin in your email every month, simply send a message with the words “subscribe visa bulletin” to  [email protected] to subscribe to the Department of State’s website. Never miss a visa bulletin again!

Most people have put a lot of time, effort, and money into their green cards, making them very valuable and sensitive commodities. If you are considering taking this step in your immigration process or are waiting on your priority date to be current, the best way to make sure you are doing it the right way and to protect your investment is to have an immigration attorney handle all of the minutiae of your case.

The dedicated team of green card attorneys here at SGM Law Group has worked with countless foreign nationals from all countries and walks of life to go through the green card process. To retain our services and speak with an immigration attorney, you can fill out our contact form and schedule your consultation today.