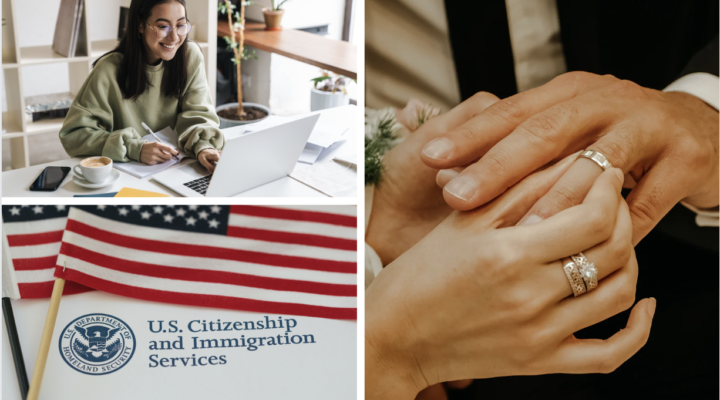 Many international students come to study in the United States every year through an F-1 nonimmigrant visa. The visa is granted only for the duration of each student’s program, with some additional months to gain work experience, after which you will need to return to your home country.

In the course of their studies, some students end up falling in love and getting married to either a U.S. citizen or a permanent resident, which means they would want to live together with their spouses permanently in the United States.

However, being in love or getting married to a citizen or permanent resident doesn’t automatically guarantee a permanent stay for an international student. Certain requirements must be met to transition from F1 to green card.

If you are already married or about to get married to a U.S. citizen or permanent resident as an F-1 visa holder and would like to obtain a marriage-based green card, this article gives a complete guide on how to achieve that and live permanently together with your spouse. To begin with, you must know the appropriate time to file an adjustment of status form from a nonimmigrant to immigrant status.

What is the Right Time to Adjust My F-1 Visa to Marriage-Based Green Card?

One mistake many international students make is filing for status adjustment at an inappropriate time. This is because applying for a status adjustment just shortly after entering the U.S. can be considered too early and may subject your intentions to suspicion by the USCIS.

In the same vein, filing when you are out of status will also affect your approval chances. Therefore, you must understand how immigration law works for visa adjustment, especially the 90-day rule.

How Can the 90-Day Rule Affect My F-1 to Marriage-Based Green Card Application?

It is generally considered an abuse of the F-1 visa to enter the United States with the apparent intention to get a permanent residency through marriage. One of the actions that count as immigration abuse is when an alien files for a green card within 90 days of entering the United States on a temporary visa.

Every visa applicant is expected to stay within the specified guidelines of their status for a certain period before attempting an adjustment. So, if you have just arrived in the U.S., it is advisable to wait at least 90 days before starting the marriage-based green card process unless you have an unavoidable reason to do that. This does not automatically mean your application would be rejected but is always better to be safe.

The United States immigration law gives two different means through which a foreign national with F-1 status can acquire a green card through marriage.

Your spouse must be the petitioner/sponsor of the application. He or she will begin by filing a petition with the USCIS to prove that he or she is eligible and ready to be your sponsor. You and your spouse must meet the requirements for a petitioner and beneficiary, respectively.

Changing from F1 to Green Card If You Are Married to a U.S. Citizen

If your spouse is a U.S. citizen, the following guidelines will be required to complete your change of status from an F-1 to a marriage-based green card.

I-130, Petition for Alien Relative

Your spouse will need to initiate the process by filing an I-130 petition with the USCIS. The form is the petition to establish the marital relationship between the two of you. It must be filled out appropriately and submitted with all the required documents.

The primary requirement of every marriage-based green card is to prove the authenticity of your relationship. As you may already know, immigration fraud is common in marriage-based green card cases. This is why it is one of the most scrutinized visa categories in the U.S. You must ensure that every piece of information given in the petition is genuine to avoid delays or denials.

I-485, Application to Register Permanent Residence or Adjust Status

The I-485 form will be filed by you as the foreign national spouse seeking to adjust the F-1 visa to a marriage-based green card. As a spouse of a U.S. citizen, you and your spouse can file both the I-130 and I-485 concurrently or separately if you’d like.

Immigrant status is always readily available to a U.S. citizen’s immediate relatives, but you will need to wait for the USCIS to adjudicate the petition. If the immigration officers determine that your relationship is genuine and are convinced that you meet the eligibility criteria for a green card, then your application will be granted. The average processing time for a marriage-based green card application for a U.S. citizen’s spouse is usually between 5 to 14.5 months (as of 2022).

A number of elements influence how long it takes your case to process including the field office/service center responsible for your case, whether your application is filed out accurately and completely, the order in which it is received in relation to other applicants, and more. As of 2022, I-485 processing time 6 to 33 months. Consult your immigration attorney for the most up-to-date estimates.

Unlike those married to U.S. citizens, immigrant status isn’t readily available to spouses of green card holders. For this reason, the processing time is usually longer. To change your F-1 visa to a marriage-based green card in this scenario, the following steps will be required:

Your permanent resident spouse will start the process by filing I-130 with the relevant documentary evidence showing that your marriage is bona fide. If the I-130 is approved, you can then move to the next stage.

Wait for Your Priority Date to Become Current

Once the I-130 is received by the USCIS, you will be issued a priority date. Your priority date is your place in the waiting line, meaning there are other people ahead of you waiting for a green card.

This is because there is an annual limit on the number of green cards sponsored by permanent residents. The priority date starts counting the moment your I-130 is received by the USCIS. You will need to wait until it becomes “current” before you can apply for a change of status to a marriage-based green card.

You can monitor the progress of the petition by checking the monthly visa bulletin. The waiting period could be for several months or several years, depending on how many applicants are ahead of you.

File the I-485 for Adjustment of Status

Once your priority date becomes current, you will be eligible to file for an adjustment of status from F1 to green card.

Other Requirements for Status Adjustment

Apart from the documentary evidence of your marriage, other crucial requirements must be met as a part of the process. They include:

You will undergo a medical examination as part of your adjustment process. The immigration medical exam is carried out by a USCIS-certified surgeon to verify that you do not have any communicable diseases, substance abuse disorders, or conditions that would cause you to become dependent on the government for support.

You will also need to appear for an immigration interview in order to verify the validity of your marriage. The interview performance is very crucial to your application success. So, ensure you attend as scheduled, dress nicely, and answer all the questions honestly and accurately.

Some of the questions you may be asked include:

What If My F-1 Visa Expires While Waiting for My Marriage-Based Green Card?

As a general rule, it is considered illegal to remain in the U.S. when you are already out of status. If your current F-1 status expires while processing your status adjustment, there are two options available.

One option is to apply for an extension of your F-1 visa or apply for another temporary visa that will allow you to remain in the U.S. legally. If you can get this done, then you will be able to stay in the U.S. The second option is to leave the U.S., return to your home country and continue the process from there.

There is a severe punishment for overstaying your visa period. If you are caught staying for more than six months out of status, you will be barred from reentering the United States for three years. And if you overstay for more than one year, you may not be allowed to reenter the U.S. for up to ten years. You can avoid this by following due process.

Getting Your Marriage-Based Green Card

After completing the process, a physical green card will be issued to you by the USCIS, recognizing you as a lawful permanent resident. However, keep in mind that the marriage-based green card is in two forms, depending on how old is the marriage.

If your marriage is less than two years old, a conditional resident status with a two-year validity period will be issued to you. This is to give more time to assess the genuineness of your marital relationship.

You must prove that you didn’t enter into the marriage in the first place just to get a green card. If, after the two years validity, you are still together as a couple, you should be able to remove the conditions by filing and getting a 10-year valid permanent green card.

For marriage more than two years old, the USCIS will issue you a standard unconditional green card with a ten-year validity period. You may choose to renew the green card every ten years or apply for citizenship after some years.

Can I Work In the U.S. While Waiting for My Marriage-Based Green Card?

When filing your I-485, you will be given the option of filing other forms— the I-765 and I-131—that will allow you to work or travel while your petition is being processed. The I-765 is an application for employment authorization and the I-131 is a travel permit.

These two forms have a shorter processing time than the green card itself. Between 120 and 150 days, you should be able to get your work permit, popularly called the Employment Authorization Document (EAD).

Having an EAD will allow you to work while waiting for your marriage-based green card. You may choose to remain with the same organization for your Optional Practical Training (OPT) or apply to work for another employer.

Going On A Short Trip Overseas While Waiting for Your Marriage-Based Green Card?

Can a F-1 student marry a green card holder?

Yes, but since immigrant status isn’t readily available to spouses of green card holders the processing time is usually longer.

How can I convert my F1 visa to green card?

Can I get married with a F1 visa?

Yes, you can; however, certain classes of J1 visa holders are subject to a two-year residency requirement meaning after their studies are completed, they have to return to their home country for a minimum two years before they can get an adjustment of status based on the marriage. There are ways to overcome this foreign residency requirement. Speak to your immigration representative.

Have F1 to green card questions we didn’t answer? Schedule a consultation to learn about all your options when it comes to adjusting your status!