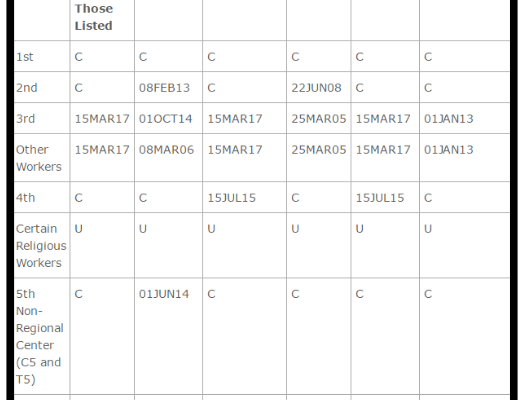 For so many people entering the United States, getting a green card is the dream. It means that you can live and work in the U.S. as a legal permanent resident. In order to get a green card, however, you must first have your priority date be current with the dates released monthly by the Department of State. This post will cover the changes in the May 2017 visa bulletin and how they may affect your green card status.

There are two main ways to obtain a green card here in the U.S.: through your family and through your employment. In either case, you cannot petition on your own. You must first have either your sponsoring family member or employer file a petition for your green card with the USCIS.

Once the petition is received, that date becomes your priority date. Each month the Department of State releases a series of final action dates that correspond to which kind of green card that you have applied for. Once your priority date is current with the final action date in your green card preference category, a visa number will be available and you will be able to submit an I-485 to change your status.

This month, according to the May 2017 visa bulletin, there has been a relatively small amount of movement in many of the categories and no movement at all in a few others. Let’s dive into the dates.

The F1 green card is meant for the children of U.S. citizen sponsors.

F2A: this subcategory is for the dependents and spouses of lawful permanent resident sponsors (green card holders):

F2B: this subcategory is designed for the unmarried children of green card holders who are over 21 years of age.

The F3 green card is for the married children of U.S. citizen sponsors.

This last category, the F4 green card, is designed for the siblings of U.S. citizen sponsors who are over the age of 21.

Below is the chart released by the U.S. Department of State in the May 2017 visa bulletin that summarizes the information. 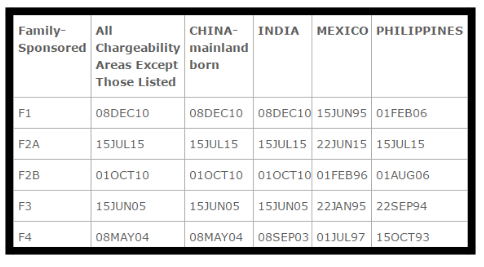 The visa bulletin for May 2017, like past iterations, divides the employment-based green card categories into five preference levels. These levels are further divided into six chargeability areas: China, Central America (meaning El Salvador, Honduras, and Guatemala). Due to the fact that the fourth and fifth preference levels are relatively rare, we will be focusing on only the first three from the May 2017 visa bulletin.

Fortunately, like in previous months, all chargeability areas are current. This means that anyone applying for an EB-1 green card will have a visa number available as soon as their I-140 petition is approved.

The last category that we will cover in these May 2017 visa bulletin predictions is the EB-3 green card. This immigrant visa is designed for workers who fall into one of three groups: skilled workers with at least 2 years of relevant experience, people with bachelor’s degrees, and “other workers” (unskilled laborers). The “other workers” category has slightly different dates that can be seen in the chart below.

Below is the chart provided by the May 2017 visa bulletin for employment-based green cards. With not a lot of movement in most categories and no movement at all in a select few, it seems as though the final action dates are slowing down as the backlog grows. As part of our visa bulletin for May 2017 predictions go, we can most likely expect the EB1 and most of the EB2 categories to remain current, making them the most sought-after immigrant visas.

Our visa bulletin predictions for 2017 may change over the coming months as President Trump moves to develop and execute plans to expedite the green card process. How he will do this is still up for debate, but it may involve dedicating more manpower to the green card process or even raising the annual cap on immigrant visas for 2017.

How You Can Stay Informed

It’s a full-time job keeping up-to-date with U.S. immigration law. Fortunately, there’s an easy way to stay current with the latest updates. Just send the words “Subscribe Visa Bulletin” to  [email protected] in order to get regular news from the Department of State website. You’ll receive vital information like the visa bulletin May 2017 predictions as it’s released.

Just because the green card process is long and frustrating, doesn’t mean you have to give up. A qualified immigration attorney can help you make the best decisions concerning your case and help you get to your green card as soon as possible and help you better analyze the visa bulletin for May 2017.

Here at SGM Law Group, our green card lawyers work relentlessly to help our clients immigrate to the U.S. With a long track record of success, it’s no wonder why people from all over the world use our services daily. To get in touch with one of our attorneys and ensure the best for your immigration case, simply complete this contact form and schedule your consultation today.