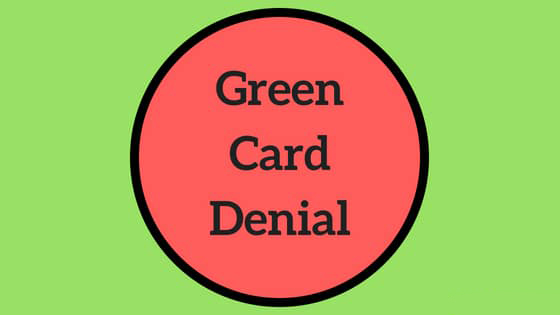 When pursuing a green card in the U.S., there is a lot on the line. You have invested time, effort, and money into your immigration path that cannot be replaced if lost. That’s why getting a green card denial can be so devastating. For those that are in the midst of denial or are looking to avoid one entirely, this post is for you. Take a look at some of the most common reasons for a green card denial and what you can do if you’ve already received that fateful letter.

To get a family-based green card, you need to have a family member sponsor your visa. That family member needs to be either a U.S. citizen or a green card holder themselves. You will need to prove your relation to this person if you hope to obtain a green card through them.

Also, you can get a green card by marrying a U.S. citizen. These are highly sought-after since being the spouse of a U.S. citizen makes you an immediate relative and gives you top priority when it comes to family-based green cards. However, due to the potential for abuse, the USCIS will interview you and your spouse to determine if your relationship is legitimate or is just a fraudulent attempt to get a green card.

To get a family-based green card, all you need to do is have your sponsor file an I-130 visa on your behalf along with the filing fees, supporting documents, and evidence of the familial relationship.

Compared to the employment-based green cards, these are relatively straightforward. You are either the relative of a U.S. citizen or green card holder or you’re not. Here are some reasons why your family-based green card might be denied:

Lack of Evidence of a Bona Fide Family Relationship

Those under this category are the immediate relatives of U.S. citizens. They include:

The family preference category is for qualified relatives of both U.S. citizens and lawful permanent residents. They include:

It is not enough to just have family relationships defined above; you must have strong supporting evidence to prove it. Your relationship with your family member could be considered less than legitimate. This is especially true if you were unable to produce proof of your kinship or you were applying for a marriage-based green card and did poorly during the interview process.

While your marriage to a U.S. citizen or permanent resident may qualify for a family-based green card, doing so at the wrong time may raise a red flag. This can happen if, for example, you entered the United States on a tourist visa, and within 60 days of your arrival, you get married to a U.S. citizen or permanent resident and you request a green card.

This rushed process may portray you as someone who had the intention of acquiring a green card from the beginning of the nonimmigrant visa application process. This is called “willful misrepresentation of your true intentions” and may lead to denial.

A family-based green card petition may be denied on financial grounds if the sponsoring relative fails to demonstrate that he or she has sufficient income or assets to provide for the sponsored family member. This must be proven with an affidavit of support which must reflect at least 125% of the HHS poverty guidelines. This is to avoid a situation whereby the sponsored family member will become a public charge after arriving in the U.S.

The U.S. government will want to ensure that the foreign beneficiary does not have any communicable disease, dangerous mental or physical disorder, or infections that could endanger the lives of citizens, residents, and visitors in the country.

To this end, the beneficiary will be required to undergo an immigration medical examination, which must be conducted by a physician assigned by a U.S. embassy or consulate or the USCIS, depending on the location of the beneficiary. If the results show that the person has a serious health or behavioral condition, this may lead to denial.

Your family-based green card petition could be denied if you were found to have a criminal history for certain crimes. Some of the common crimes for inadmissibility are drug-related crimes, aggravated felonies, and participation in terrorism.

For the most part, the first reason is the most common. Not everyone has access to birth certificates or marriage licenses in their original form. Without these documents, it can be difficult to prove your relationship to the U.S. citizen or green card holder who is sponsoring you. If you do not have the required documents, speak to your immigration attorney before petitioning for the green card to see if you should expect a denial and to evaluate your options.

Additionally, many mistakes are often made during a marriage-based green card interview. Answers that are fabricated or inconsistent raise red flags with immigration officers and could result in your green card being denied. Your attorney can coach you through the interviewing process provided that your relationship truly is legitimate.

These immigrant visas are issued based on your job or occupation. For many of these, you need to have a U.S. employer file your petition on your behalf. However, there are some that allow you to petition for yourself. For those that require an employer, you will need to show that a legitimate employer-employee relationship exists.

Your employer also may need to obtain a PERM Labor Certification for you. This is an involved process that requires your sponsor to run ad campaigns for your job and actively interview potential applicants.

To get an employment-based green card, your sponsor (whether that is you or your employer) will need to file an I-140 along with the necessary fees, supporting documentation, and evidence that can be outlined by your attorney.

Unlike with family-based green cards, these are not as straightforward. There are many different visas and each has differing requirements. Your green card could be denied as a result of a failure to meet any one of these requirements. Here are some of the most common green card denial reasons for the more common visas:

Other Denial Reasons for Family-Based and Employment-Based Green Cards

Missing information in your application forms

If you don’t provide all of the information requested in each application form, this may cause a delay or denial.

If any of the documents submitted is in a language other than English, they must be translated. This includes birth and marriage certificates as well as other relevant supporting evidence. The translator is also required to certify the translated version by including his or her name, address, and the date the translation was completed.

Because the fee structure often changes and the locations to send the fees to can be confusing, it’s easy to pay incorrect fees during your green card petition. To avoid this, you need to double-check the required fees for each application form and pay in full.

Can the Grounds for Inadmissibility Be Waived to Avoid Denial?

While some of the grounds for inadmissibility can be waived, some do not have provision for a waiver. Keep in mind that most of those grounds of inadmissibility apply to both family-based and employment-based green card categories.

Types of inadmissibility grounds that may be waived:

Note that the U.S. Department of Homeland Security has the statutory decision as to whether to waive or not waive any of the above. The waiver request will be processed on a case-by-case basis and will be determined based on the peculiarities of each applicant.

Types of inadmissibility grounds that may not be waived

What to Do If You’ve Received a Green Card Denial

If you do receive that dreaded green card denial notice, there are a few options you might be able to take depending on your situation.

First of all, you may be able to file a legal motion to either have your case reopened or reconsidered. A motion to reopen your case should be made if new evidence or documents have become available and may change the outcome of the case were it to be reopened.

A motion to reconsider is made when you and your attorney believe that the evaluating officer was in error concerning the decision made on your case and you can present a solid legal argument for a reversal of the decision to deny your green card.

Alternatively, you may also be able to file an appeal to a third party to re-evaluate the decision, the Administrative Appeals Office. However, the AAO has a long track record of siding with the evaluating officer in green card denial cases.

In any case, you should never attempt to utilize any of these complicated legal methods without the help of a qualified immigration attorney.

Is There A Difference Between Rejection and Denial?

Yes. In the world of immigration law, terms that seem synonymous often have very specific meanings. In this case, denial and rejection, though they are very similar words, relate to different things.

When the USCIS is processing your green card petition, they take a two-pronged approach. The first prong involved having an officer look over your case to see if all of the required information is present and consistent on your petition, that you have the necessary supporting evidence and documents, and that the appropriate fee was paid. If your petition fails any of these checks, it will likely be rejected (though you may be issued a Request for Evidence if you lack documentation).

If your petition passes the first prong, it will go onto the second, where the officer will adjudicate your case to determine whether or not it merits a green card. If your petition fails this stage, then it will likely be denied.

If you have received a green card denial or would like to avoid one, the best thing you can do is to hire an attorney to help you take the next steps. VisaNation Law Group has helped countless people like yourself explore successful options in the wake of a green card denial.